AASraw is with synthesis and production ability from gram to mass order of Noopept(GVS-111) powder (157115-85-0), under CGMP regulation and trackable quality control system.

Noopept(GVS-111) powder is one of the strongest nootropics available on the market today. It provides a boost to overall cognition and has a slight psychostimulatory effect. Contrary to most nootropics, Noopept’s effects start within mere minutes of ingestion making it an excellent choice right before mentally demanding tasks.

Noopept powder is the brand name for N-phenylacetyl-L-prolylglycine ethyl ester, a syntheticnootropic molecule.

Due to its incredible potency, the recommended dosage of Noopept powder is relatively small, usually 10 to 20 mg taken as often as three times daily. Dosage should not exceed 40 mg in a 24-hour period.

Since the body metabolizes Noopept arw powder rapidly, and it has a very short half-life in the human body, it is preferable to take multiple small doses versus one large dose to extend Noopept powder’s acute effects.

When starting out with Noopept powder, we recommend a starting with the minimum effective dose, with careful observation, before increasing dosage. Each person should determine their own optimum dosage.

In powder form, Noopept powder is usually placed under the tongue or mixed with water and drunk. Effects are felt quickly after administration, as fast as within 15 minutes.

According to the dosing label that comes in the packet insert in Russia, it is recommended to take Noopept raw powder for 1.5-3 weeks and then, if necessary, to begin another cycle after a 1-month break. Alternatively, many nootropic users follow a cycle of 56 days on and 4 days off.

It is not recommended to take Noopept powder late in the evening as its energizing effects may interfere with sleep.

Memory and Learning
Noopept powder’s most emphasized benefit is how it can enhance memory and improve the learning process. Noopept powder, like Piracetam, assists with memory formation, but with additional benefits not present in the latter, which are memory consolidation and memory retrieval. Noopept powder facilitates the proper management of all forms of stimuli as they are processed by the brain, which allows for better memory retrieval. In other words, signals being processed by our senses are more streamlined as they are transported into our brains in the form of memory.

Through the continued use of Noopept powder, you will likely notice that you can digest more information and process it more readily for use in your daily activities. You might even recall names, places, maybe a word spoken in a chance encounter, a song title that you thought you had forgotten before, and so on.

Neuroprotective Properties
Studies show that Noopept powder has high neuroprotective properties. The stimulation of the neurons caused by the health supplement prevents oxidative damage and apoptosis in the human brain. Many patients dealing with cognitive impairment regularly can benefit from a regular dosage of Noopept raw powder to prevent further dissociative cognitive functions.

Increased levels of NGF
NGF (Nerve Growth Factor) is a unique protein in the body that is involved in the growth, maintenance, and survival of nerve cells, including brain cells. NGF is also considered to be a key player in neurogenesis, your body’s ability to create new cells.

By increasing NGF levels in the brain, we support the mechanisms involved in neurogenesis which improves the performance of neural networks within the brain, allowing for new neural connections. The result means potentially improved mental abilities in virtually all areas of cognition.

Increased levels of BDNF
BDNF (Brain-Derived Neurotrophic Factor) is another protein in the body that has a similar role to the NGF mentioned above. BDNF is considered one of the most important molecules involved in memory, playing a vital role in both short-term and long-term memory formation.

Improves Associations between Brain Hemispheres
Both the right and left hemispheres of the brain have their own localized functions. Through the use of Noopept powder, each of these functions can be enhanced through the synthesis of various memories, ideas, and stimuli. There are nuances among these functions that enhance the way we think. That is why a lot of people have claimed that their quality of life had a significant improvement from taking Noopept powder on a regular basis.

Users of Noopept powder report results of improved clarity, better memory, and focus. More studies are required to determine exactly how Noopept powder delivers its benefits to the human brain. Studies on animals have shown that Noopept powder increased alpha/beta1 activity in all brain areas.

In humans, based on observational, uncontrolled studies, Noopept powder demonstrated rehabilitative benefits to patients with mild cognitive disorders. Currently, Noopept raw powder tablets are undergoing clinical assessment as a way of treating cognitive deficiency of post-traumatic origin and cerebrovascular cause. The brain benefits are derived from antioxidant action, anti-inflammatory properties, and the inhibition of toxicity with the elimination of excess glutamate and calcium. It was also observed that blood composition and flow were improved.

Taken orally, Noopept powder is absorbed by the digestive system and then readily crosses the blood-brain barrier. When administered in the proper dosages, it is nearly completely used by the brain, and very little is wasted. Noopept powder targets glutamate receptor sites where it is believed to bind with the glutamate and inhibit breakdown. Glutamate, being one of the most powerful neurotransmitters, supports and expands cognitive functioning.

Noopept powder acts quickly once it is in the bloodstream, maximizing concentration after just 15 to 20 minutes. Advocates of the supplement report the flooding of clarity brought on by the immediate advantage of additional oxygen to the brain and improved glucose use. Many individuals report improved vision and sharper, more vibrant colors. Others have even reported enhanced hearing following just a short period of usage.

Noopept powder is a nootropic supplement that’s been getting a lot of attention lately. It has close ties to the popular racetam family of nootropics that are known for their benefits on cognitive ability as well their neuroprotective properties. What makes Noopept raw powder a particularly unique nootropic in your toolbox is that its effects are felt almost immediately after ingestion.

Many nootropics can take days, weeks, or even months, for their full effects to kick in but Noopept raw powder is another story. Another nootropic that compares to Noopept powder’s immediate effects is phenylpiracetam.

Currently, Noopept raw powder is being prescribed and distributed in Russia and its surrounding countries for its nootropic properties. Its popularity has drastically increased and is now distributed worldwide.

Noopept powder as a nootropic is commonly compared to piracetam and aniracetam. It works via a similar mechanism as piracetam but is estimated to be 1,000 to 5,000 times more potent. Its impressive potency doesn’t imply that its effect is more profound; it simply attunes itself better to the brain’s receptors, and as a result, Noopept raw powder can be taken in relatively smaller doses to produce similar effects as that of Piracetam.

Noopept powder is also very inexpensive when compared to other nootropics because of how potent it is per milligram. Its effectiveness and affordable cost per dose have made it a favorite among the nootropic community.

Does Noopept powder Have Any Side Effects

For all the positive effects that Noopept powder may have on your cognitive health, it has only a few occasionally reported minor side effects that should be noted such as headaches, restlessness, dizziness, and irritability. These are most common when Noopept raw powder is taken in high doses.

Further evidence also suggests that Noopept powder can enhance the effects of stimulants such as amphetamines, so caution is advised.

How to buy GVS-111 powder: buy Noopept powder from AASraw 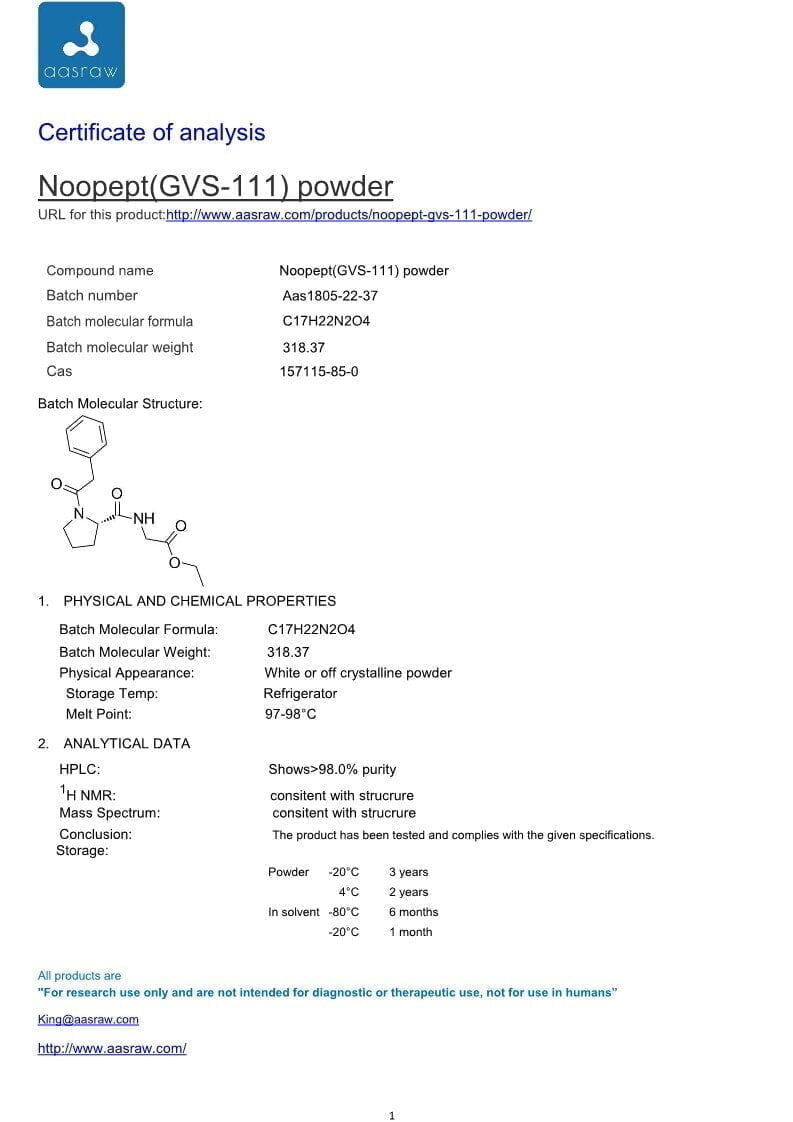 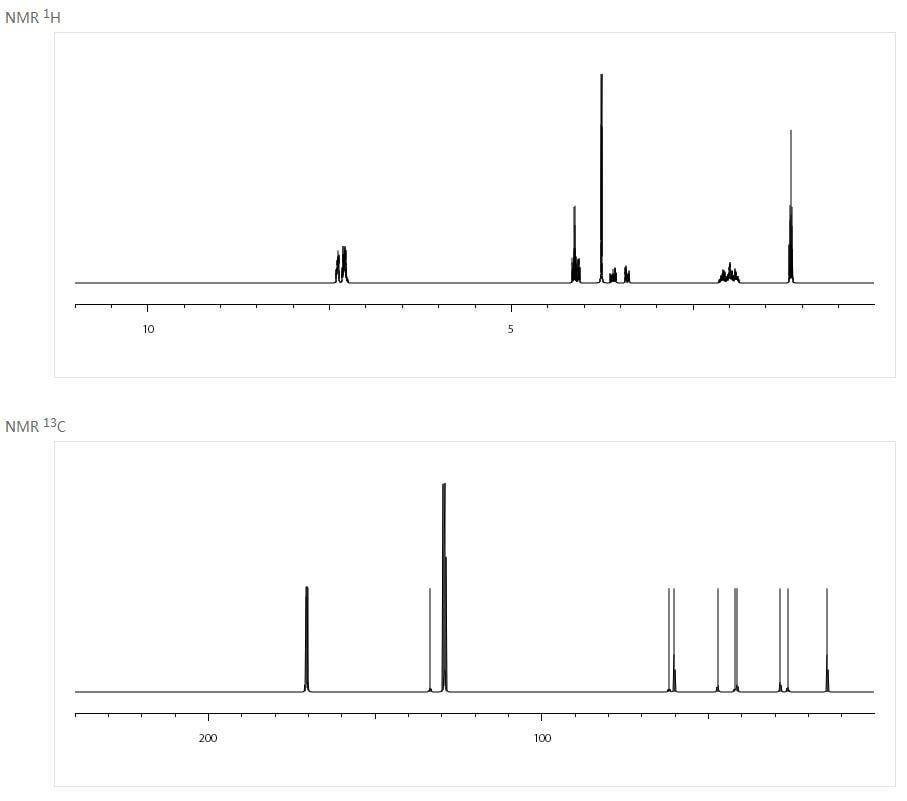 The 7 Best Nootropics(Smart Drugs) in the market of Noopept