AASraw is with synthesis and production ability from gram to mass order of Osimertinib (AZD-9291) powder (1421373-65-0), under CGMP regulation and trackable quality control system.

Osimertinib(AZD-9291) powder is an oral, irreversible inhibitor of epidermal growth factor receptor (EGFR) sensitizing and T790M resistance mutations (IC50s = 15-17 nM) while sparing the wild-type form of the receptor (IC50 = 480 nM).1 It binds the related IGF1R And hERG receptors with reduced implantency (IC50s = 2.9 and 16.2 μM, respectively).1 AZD 9291 has been shown to inhibit tumor growth in a xenograft mouse model at oral doses of 5-10 mg/kg and has been tested clinically in patients With advanced EGFR mutant non-small-cell lung cancer.

AZD-9291 powder (CAS 1421373-65-0) is the only approved medicine indicated for patients with metastatic EGFR T790M mutation-positive non-small cell lung cancer. This indication is approved under the FDA’s accelerated approval process based on tumour response rate and duration of response (DoR).

The common dverse effects include diarrhea, stomatitis, rashes, dry or itchy skin, infections where finger or toenails abut skin, low platelet counts, low leukocyte counts, and low neutrophil counts.
There are no contraindications for TAGRISSO
Interstitial Lung Disease (ILD)/Pneumonitis occurred in 3.3% and were fatal in 0.5% of 813 TAGRISSO patients. Withhold TAGRISSO and promptly investigate for ILD in any patient presenting with worsening of respiratory symptoms indicative of ILD (e.g., dyspnea, cough and fever). Permanently discontinue TAGRISSO if ILD is confirmed
QTc interval prolongation occurred in TAGRISSO patients. Of the 411 patients in two Phase II studies, one patient (0.2%) was found to have a QTc greater than 500 msec, and 11 patients (2.7%) had an increase from baseline QTc greater than 60 msec. Conduct periodic monitoring with ECGs and electrolytes in patients with congenital long QTc syndrome, congestive heart failure, electrolyte abnormalities, or those who are taking medications known to prolong the QTc interval. Permanently discontinue TAGRISSO in patients who develop QTc interval prolongation with signs/symptoms of life threatening arrhythmia
Cardiomyopathy occurred in 1.4% and were fatal in 0.2% of 813 TAGRISSO patients. Left Ventricular Ejection Fraction (LVEF) decline >10% and a drop to <50% occurred in 2.4% of (9/375) TAGRISSO patients. Assess LVEF before initiation and then at 3 month intervals of treatment. Withhold TAGRISSO if ejection fraction decreases by 10% from pretreatment values and is less than 50%. For symptomatic congestive heart failure or persistent asymptomatic LV dysfunction that does not resolve within 4 weeks, permanently discontinue TAGRISSO.
Advise pregnant women of the potential risk to a fetus. Advise females of reproductive potential to use effective contraception during TAGRISSO treatment and for 6 weeks after the final dose. Advise males with female partners of reproductive potential to use effective contraception for 4 months after the final dose.
The most common adverse reactions (>20%) observed in TAGRISSO patients were diarrhea (42%), rash (41%), dry skin (31%) and nail toxicity (25%).

AZD-9291 powder was highly active in patients with lung cancer with the EGFR T790M mutation who had had disease progression during prior therapy with EGFR tyrosine kinase inhibitors.

AZD-9291 powder is being studied in the confirmatory trial, AURA3, an open label, randomised Phase III study designed to assess the efficacy and safety of AZD-9291 powder versus platinum-based doublet chemotherapy in patients with EGFR T790M positive, locally advanced, or metastatic NSCLC who have progressed following prior therapy with an EGFR-TKI. AZD-9291 powder is also being investigated in the adjuvant setting and in the metastatic first-line setting, including in patients with brain metastases, as well as in combination with other compounds.

AZD-9291 powder 80mg once-daily tablet is the first medicine indicated for the treatment of patients with metastatic epidermal growth factor receptor (EGFR) T790M mutation-positive non-small-cell lung cancer (NSCLC), as detected by an FDA-approved test, who have progressed on or after EGFR tyrosine kinase inhibitor (TKI) therapy. Non-clinical in vitro studies have demonstrated that AZD-9291 powder has high potency and inhibitory activity against mutant EGFR phosphorylation across the range of clinically relevant EGFRm and T790M mutant NSCLC cell lines with significantly less activity against EGFR in wild-type cell lines.

Osimertinib powder has recently been published by the World Health Organisation (WHO) as the proposed International Non-proprietary Name (INN) for AZD-9291 powder, and may become formally adopted during November 2015. In the US, the American Medical Association accepted Osimertinib powder as the United States Adopted Name (USAN). 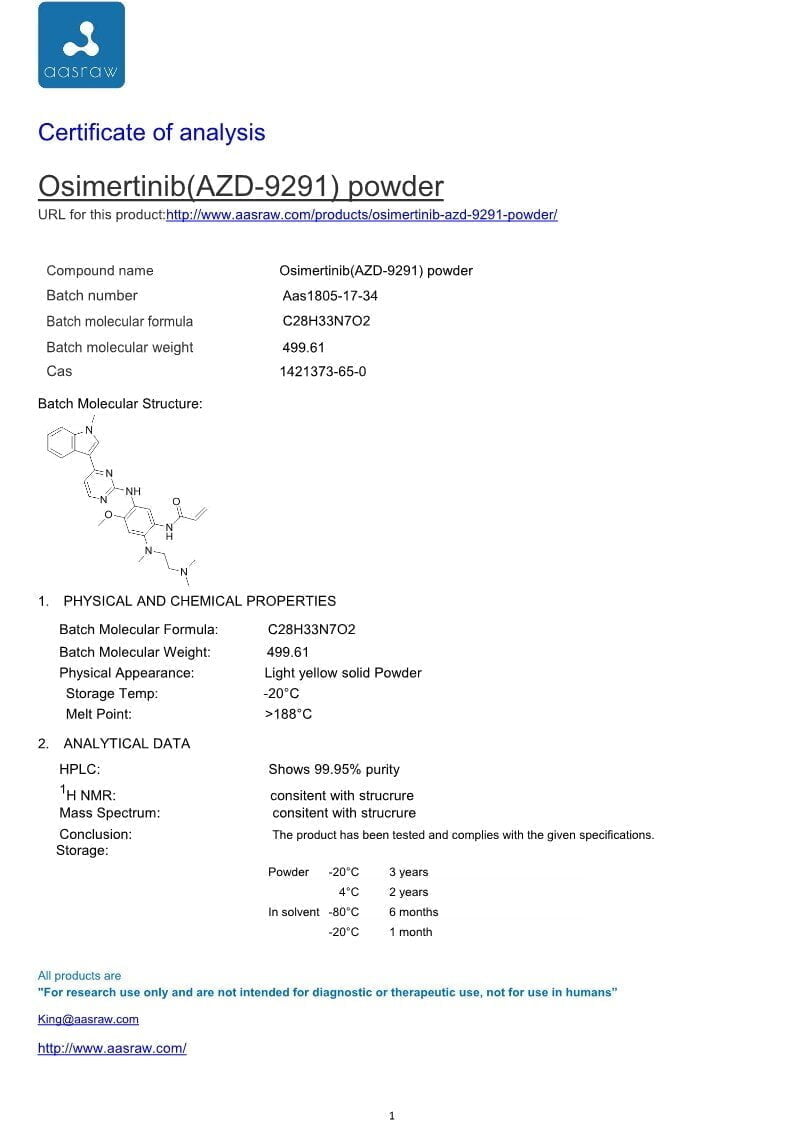